Hiring by Gut: An Autopsy

A recent technology client had a history of underwhelming hires: after-the-fact skill deficits, challenges around team-fit, surprise character limitations. The director who led my project knew the cost of poor hires keenly and also knew he was ramping up quickly in a highly competitive environment.

My task was to get them out of an ad-hoc hiring approach, reduce confusion around interview goals, and create a quantifiable, reliable set of metrics that the team could understand and rally around. I also wanted a metric-driven approach to providing feedback to their recruiters whose submitted candidates were, more often than not speaking, underwhelming and scattershot.

The work started with an assessment of a specific hire: the job description, screening process and interview approach. Understanding what isn’t working creates clarity on key areas that need to be addressed and how a data-driven hiring process might impact them.

Here are the seven major challenges that came up.

The Job Description Required a Lawyer

To properly read the job description for the position, each member of the interview team would have had to spent 20 minutes to read, understand and prioritize. Instead, three members of the panel skimmed it. Two others hadn’t read it because they didn’t know it was available.

She Could Live With It, But He Can’t

The team members had done a great job of preparing questions for the interview, coming in dutifully with three or four questions a piece and sharing the interview time in round robin fashion, but they clearly had different standards for what an appropriate candidate would look like. The panel was actually hiring for different responsibilities, capabilities and culture fit. 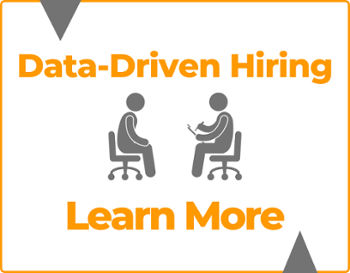 Oops. They Ran Out of Time for the Big Stuff

The questions that were prepared for the meeting – as well as those that came up extemporaneously – didn’t map to the core evaluation criteria discussed after the interview. Through no fault of their own, time was essentially wasted on earnest, but “off topic” assessment.

Nobody Knew What the Role Was

That sounds impossible. Of course, they must have known what the role was. Each of them could have told you “it was for the analyst position.” That was in the invite email. But when the candidate asked for more information on the role’s major responsibilities, there was disagreement and confusion in front of the candidate. They couldn’t tell him because they themselves weren’t sure and the hiring manager wasn’t in the room (and probably should have been).

One team member wisely prompted everyone to share their opinions before everyone left. At first a superficial “thought he would probably be good” response was shared, but there was no way to wrestle down anything more concrete and certainly not measurable. The general take-away was a collective “we liked him.”

Apples to Not Apples

With no data to quantify an applicant’s strengths, the challenges of remembering an interview the week before, and different attendees in different screens, the team couldn’t compare the candidates to each other without going back to margin notes on the resumes themselves. Interview recollections were lost in the ether, wasting the team’s chance at the best candidate not to mention the candidate’s own time.

The quietest voices were drowned out. In the post-interview debrief, a highly talented but opinionated panel member took the floor on the skills that mattered to him. He made what appeared to be a valiant attempt to listen to others, but several members remained quiet throughout. With a data-driven post-interview assessment, the numbers would have reflected the less assertive team members and surface areas of disagreement that should be further explored.

After some training on a data-driven job definition, the team then came up with individual and team scores across 3 major categories of fit, including skills, team culture, and impact.

They were hiring for a job description they didn’t need. The financial and team impact would have been considerable not to mention its negative impact on the new hire.

Reach out to learn more about an engaging and data-driven approach to hiring.

Can you take a moment to let me know in the comments if these hiring challenges are recognizable? What is missing? Which ones resonates the most? What kind of data do you use in your own hiring process? What candidate metrics do you expect from your recruiters?